This book straggled into the library a month after we’d finished South Carolina, but I had remembered checking it out earlier and REALLY wanting to read it to them.

Ron wants to fly planes and design planes when he grows up.  Every time he goes to the library he spends hours looking at the books about planes.  One day he decides that he wants to check out HIS OWN books, but that’s not allowed.

You see Ron lives in South Carolina in the 1950s and then blacks weren’t allowed to check out library books, he had to get someone else to check them out.

This is the true story of how he stood up for himself one day at 9 years old.  Ron grew up to be an astronaut at NASA and was on the Challenger space flight. 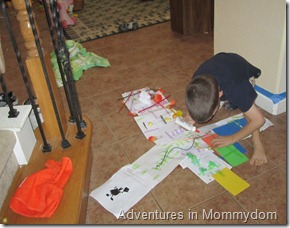 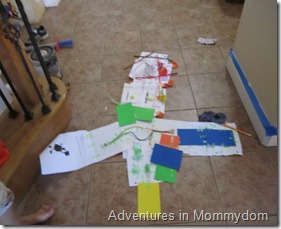 I challenged my kids to design a plane like Ron wanted to do.  They took about 10 papers from the recycle bin, pipe cleaners, fun foam, yarn, and some fake flower petals.  Oh and large amounts of tape.  This is what they came up with.  They tried to fly it off the upstairs loft and it just flew straight down.

It always impresses me what they’ve learned and how it’s been absorbed.