I have to admit I checked this book out with some trepidation.  Books like this tend to fall one of two ways.  They either totally whitewash what happened or they blame the white men and make it look like we were trying to kill everyone.  I was worried this was going to be one of the latter.

But, quite thankfully  it wasn’t.  It did a really good job talking about building the transcontinental railroad and how the white men were unfair to the Chinese who came over.  They talked about the challenges the workers faced and how hard it was.  It wasn’t whitewashed, but it also wasn’t done to put blame, just done factually in a good story. 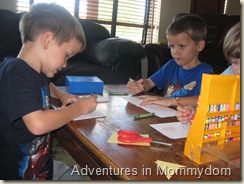 First they drew pictures of what happened in the story.

That’s when I discovered that Iron Man went back in time to protect the workers on the railroad.  Little known fact. 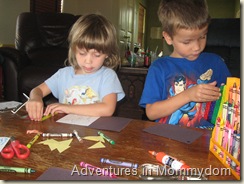 Then we cut out little triangles to glue on the people’s heads for their coolie hats. 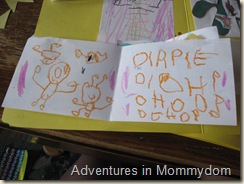 Here’s their summaries:
Batman: Iron Man came back and fought the monsters that caused the avalanche and then he dug the guy out of the snow so he wouldn’t freeze.  Then they built a train.  (This is my best recall because he wouldn’t let me write it down because he said he already had, see the letters on the top left). 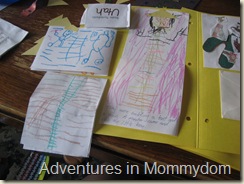 Superman: There was a monster biting the boy when he was covered in the snow.  Then a big monster came and bit the guys up on top.  Another guy tried to look for him, but the monster kept eating him.  They were trying to build snow piles.  (Superman’s is the one with the blue railroad and brown dirt) 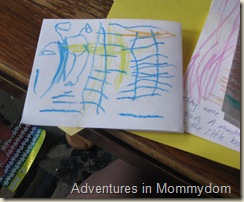 Princess: They were building a tent and a train. A monster came and stole the little boy.

Princess’ is the one on the right in the middle picture.  Hers is the big tall pink one.  Next to this you can see the other side of Batman’s.  They had a lot of fun creating these.  It really cracked me up.

For more great art and story ideas head on over to A Mommy’s Adventures to see what everyone else is doing this week.

Oh, and if you’re so inclined say a prayer for my family and Tara today.  This is Sam’s birthday, and it will be the first one since he died.  We’re “celebrating” by watching Star Wars in his honor (Return of the Jedi, probably the most kid friendly of the original movies).