One of the local Tennessee heroes is Casey Jones, he was a train engineer in the 1800s who was known for never being late, and who sacrificed himself but saved everyone else on his train from a crash.

He was originally made famous by a song written a few years after his death, and then became famous again when Disney made a cartoon short about him. 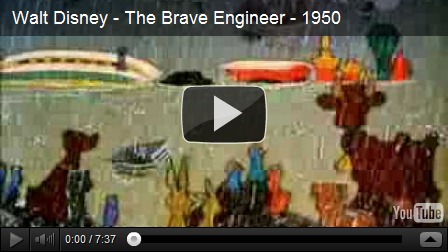 For our study we read about Casey Jones {affiliate link}, then we watched the movie.

Afterwards we compared the book and the movie.  In this instance we did a simple same and different T-chart, but this is a favorite activity of mine with books that have been made into movies.  What was changed? 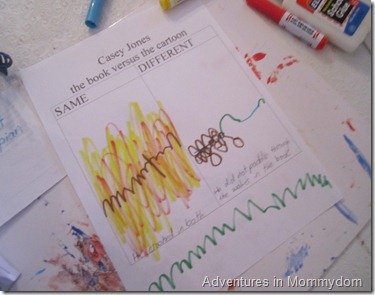 In case you can’t read what that says, in both he crashed, but he did not paddle through water in the book.

There were a few significant differences between the book and the movie, and if you’re interested I’d highly recommend the wikipedia article about Casey Jones, it gives some interesting facts there.

What is your favorite book to movie transition?  Do you like any picture books that have been made into movies.  I have very mixed feelings on those movies.