Hey!  I spelled it right!  I was so sure I was going to spell that wrong.


Every now and then you find a book that just works completely.  It presents the information well, the pictures are interesting, and it’s something you didn’t know before.

This was one of those books.

I’ve heard of Sequoyah trees, and now I know I’m spelling something wrong because his name is spelled differently than the trees.  I knew the name of the person, but not much beyond that.

I learned Sequoyah created the Cherokee alphabet and persevered through people burning his house down to stop him and other hardships.  Isn’t that cool.

I’ll be back.  I promised to teach the kids how to use the “hot glue gun.”  Can it really be called that if it’s a low temp one?

I’m back.  The kids are now happily gluing away.  I foresee another trip to buy lots of wooden supplies. 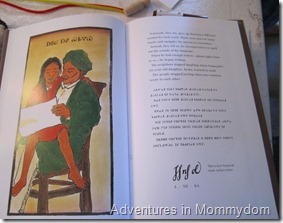 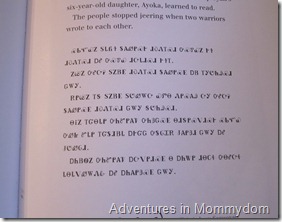 This is what really intrigued me about this book.  It includes the story written in Cherokee.

After reading it I challenged the kids to create their own version of the alphabet. 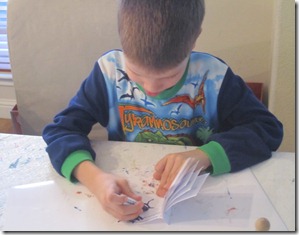 Which they happily set to.

My boys created various blobs.  Older friend made a rather ingenious alphabet based off of musical symbols and other symbols he knew.

Princess just recopied the alphabet.  She was not getting it.  Younger friend again happily scribbled.
Tennessee Sequoyah

Okay, so they’re not going to invent alphabets, but they did learn about a cool man who stood up for what he believed in.

Linking this up over at All Things Beautiful.