First the winner of the Simple Stamped Necklace:

Honestly, my favourite is the tiny single stamped charm. It is simple and perfect!

So, on to the topic of this post.  Things you never live down.  I was thinking about this because I flew on an airplane this weekend, and despite the fact that one of these mistakes happened 8 years ago, I still haven’t lived it down.

Here they are, more or less in the order they happened, saving the longest story for last:

1.  You never live down melting your Mother’s spice rack.  Was it my fault that the box for her brand new spice rack was a little too close to the burner?  No.  So, that shouldn’t have been my fault.

2.  You never live down trying to burn down your Mother’s house.  Okay, so I shouldn’t have left the candle unattended in a plastic candleholder, but I thought if they’re going to give it to us in that candleholder that it wouldn’t melt and catch fire.

3.  You never live down melting your carpet by ironing on it.  I had seen my mother use a folded up towel as an ironing board on the counter growing up.  I thought same principle, but on the floor.  I was just ironing one short seam, no problem.  And then I melted the carpet.  Ummm…..  oops.

4.  And finally, things you never live down is bringing scissors onto a plane.  Especially if it’s a week after 9-11.

So, back when Jeff and I were engaged we were going to fly up to New York for his cousin’s wedding, and I’d get to know his parents better because his Mom was also going.  The plan was Jeff would pick me up from school and we’d drive to the airport and leave.

Now, they’d just started flying again, and everyone was very nervous about flying, and so lines were insane.  We stood in line for an hour to get checked in, and then an hour for security.  As we’re getting closer and closer to the front I start saying, “I think I have scissors in my bag,” and Jeff is starting to freak out because he doesn’t really like flying.  Actually, it’s more he doesn’t like airports, and we’re close enough to not making the flight he does have a point.

So, we get up there, and of course they pull me aside, and say, “Ma’am we’re going to need to check your bag, you’ve got contraband.”  Being the helpful person I am, and knowing how stuffed full my teacher bag was, I say, “Oh, I know what it is, I forgot to take my scissors out.”  So, I pull out a pair of kindergarten scissors. 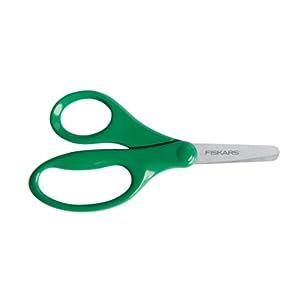 You know, the kind you give to the 5 year old and say, “It’s okay honey you can run with these because they’re not sharp.”  That kind.  The kind that barely cut paper.

They look at them and are trying to decide if I  can take them on.  So, they call over the guard with his automatic rifle (I used to say a different gun, but Jeff laughed too much when I gave too much detail about things I didn’t know), and is trying to decide as well.  He can’t decide, so they call in someone else.

Finally, there’s about five people trying to decide if my Fiskars safety scissors are okay to fly, and they come up with, “Ma’am, if you want you can go back to check-in and check the scissors, and you’ll get them back when the plane lands.”

Ummm…….  Did you see the line?  Another two hours in line and my plane leaves in fifteen minutes, for a $2 pair of scissors?  I don’t think so.

So, I tell them to keep the scissors, and they apologize, and I get on the plane and happily arrive in New York.

Where I open my bag in the hotel room and discover 5 more pairs of safety scissors and a pair of adult scissors.

To this day NINE YEARS LATER I am not allowed to go near an airport without being asked if I have scissors in my bag.  Jeff asked me, Mom asked me.  Everyone asked me.

Oh, and airport security have no sense of humor, really.  Do not make funny comments, they will not think it is funny.