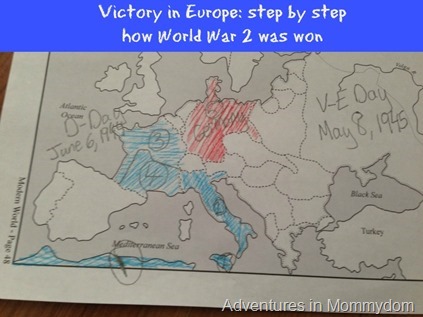 Here comes another lesson that makes me say: I wish I had WonderMaps by Bright Ideas Press (as a side note I’m ordering it today, everything is on sale for 30% off with the code SPRINGFLASH, and I want to get that and notebooking pages for MOH1).

Completely unrelated blathering to my post, about MOH, feel free to ignore.

So, I am just so insanely glad to be going back to MOH (Mystery of History) next year.  I just sat there thinking about how happy I was to go back to Ancient History last night as I wasn’t sleeping.  Last time around when we reached Great Wall of China, we built it on our map out of playdough.  I’m thinking this time around I’m going to have the kids use some extra bricks at our house and build one out of bricks………

End my random musings from not sleeping last night

The kids and I read through the chapter covering the victory in Europe and all I got from them was a bunch of blinking eyes.  So, I ran downstairs and found a blackline map of World War 2 Europe (if you’re covering modern history, this is a great packet of maps, it’s got most major wars during that time).  First step to winning: Take French Algiers.  This was necessary for two reasons: 1.  They needed to get the oil fields there, and 2.  They needed a launching grounds for the next step. 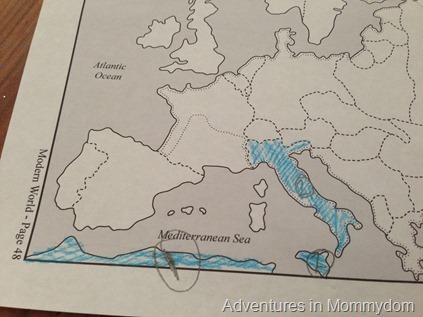 The next step: take Italy.  First because Italy had been an agressor, and also because we needed Italy as the staging for the next steps.

Next we took back France.  We nominally worked with the French Resistance, but primarily this was an operation with the British.  The Allies spent months working on how to land and training the soldiers how to get out of the boats.  Each soldier had less than a minute to de-boat, and it was an impressive undertaking to this day.  At this point we also colored in Germany so the kids could understand what the ultimate goal was (Side note, I got to be in France during the 50th anniversary of D-Day, and that was the souvenir t-shirt I got from there).

Then we retook the rest of France, which was an arduous process and lost many men during this time. 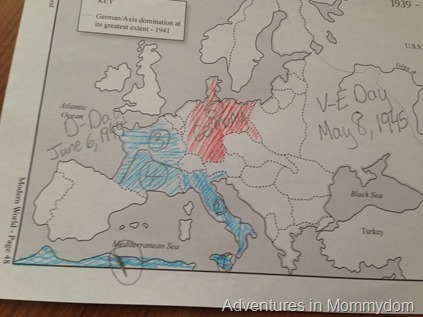 The final step was taking Germany, which was split between us and the Russians.  There was a gentleman’s agreement between the two generals delineating which side would take what.  This is also the point when Miracle of the White Stallions

(affiliate link) took place {I should see if I ever had a copy of that book, or did I just check it out from the library 2 million times}.

Victory in Europe was declared on May 8, 1945 with the total surrender of Germany.  Peace was negotiated and it was split in half, with the Soviet Union “administering” one half, and the rest of the Allies administering the other half (and this will cause problems in and of itself later on).

So, that’s how victory in Europe in World War 2 was won.  Obviously this is much simplified, and doesn’t delineate all of the battles and deaths during these campaigns.  We didn’t go into the Pacific campaign that much this time around because to be honest I don’t know as much about it, and I could tell their interest was waning, so we’ll catch it next time around.

Now I’m off to order me some Wondermaps with the code SPRINGFLASH.  And then I’ll spend the next week haunting the mailbox.

Forgot to say, I’ll be linking up with these two wonderful blogs: