I’m sure this will totally shock you, but it’s hot here.  No really, it was over 100 at the beginning of this week.

I was all set to show you my favorite water games for kids (as compared to the teens) from VBS that we do every year for water day, and then this was what happened to the games: 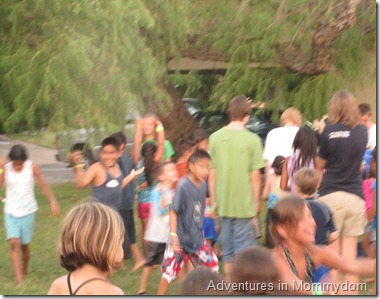 Yes, that is wild pandemonium as 200 kids all throw as much water as they can at each other.  Time ran short to play the games, so instead they just opted for the always popular throw water at each other…….
I was hoping I had pictures from earlier years, but I don’t……
So, here’s the two water games for kids we played this year, hopefully I explain it well enough you understand.

This is essentially duck, duck, goose with water.  The “ducker” walks around with a cup of water.  As they get to each kid they say, “drip,” and drip a little bit of water on the kid.  The person who is chosen to be it, you say, “drop” and dump the entire cup of water on them.  If you get tagged you sit in the “mush pot,” which is usually a baby pool full of water.

I’m sure you can see people don’t really run all that fast, and are eager to get tagged. 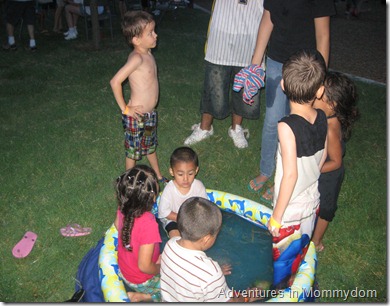 Divide the kids into two teams.  Have them line up a good ways from the end point with a bucket of water, and each team has a cup.

At the other end one of the teens leading the club would be laying down with a two liter bottle on their head.  The kids run up and try to fill the bottle before the other team.  Ideally, they don’t pour too much on the teen.  Yeah, the “poor” teen gets soaked.  I mean completely and 100 percent soaked.

Hopefully these explanations make sense.  Maybe I’ll have my kids reenact the games………

And because I know you were dying to see how water day was at my club in video form, and a quick shot of me serving food (stay tuned tomorrow for an actual write up of clubs).

I can’t wait to see how ya’ll stay cool.  I have some fun ideas coming up, one that I’ll have to warn Jeff about……..