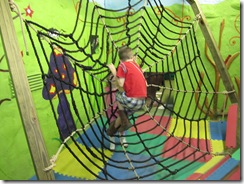 But of course we had to stop at the Monroe zoo, which is AWESOME.  If you’re ever in Monroe, LA and you have a few hours to spare stop in and wander around.  It’s the perfect size for little guys, and it has a super neat train and boat ride, which sadly weren’t working when we went there. 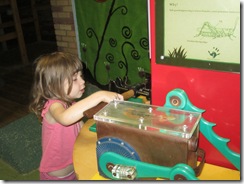 The coolest part for the teacher in me was their “Small World” exhibit.  I know that’s not what they called it, but it had great explanations for how different insects make their sounds, and all sorts of other hands on ways to learn about insects.

My kids loved the nocturnal animals exhibit because they got to see all of the bats and other night animals.  Batman is currently quite obsessed with bats (which is ironic considering his nickname). 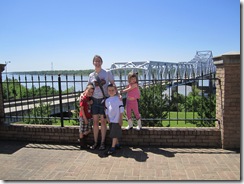 We traveled on for all of an hour and crossed the Mississippi.  Incidentally, I accidentally put the wrong initials in my phone to check the distance and was quite shocked to learn we had 19 hours to go, and then realized it was taking me up to Michigan……

I didn’t get my usual picture at the state line, but instead got a picture of us in front of the river.  The kids were suitably impressed by the size of the river. 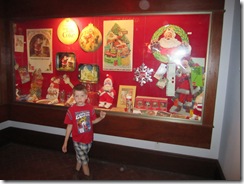 We stopped in Vicksburg at the Coca-Cola museum there.  Coke was first put in  a bottle by the drug store there, and they helped with a lot of the early advertising campaigns.  Batman, who loves Coke, was quite happy to go through there and pose in front of the Santa coke ads.  And by the way keep an eye out next week for a post about Coca-Cola and Georgia (it was invented in Georgia, so it was one of our Georgia activities).  Batman was very disappointed he did not get to drink a Coke from the Coke Museum.  Poor guy. 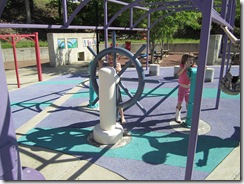 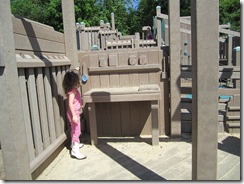 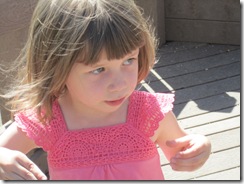 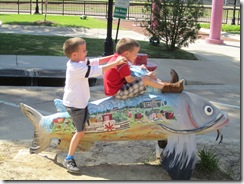 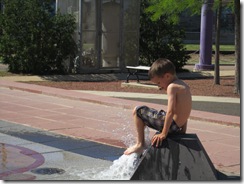 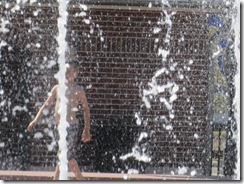 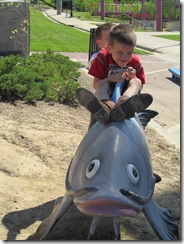 Of course the kids favorite thing about Vicksburg is an awesome park that is a block South of the Coke Museum.  I mean look at it.  It’s got a couple of awesome playscapes, wonderful water play area, and there’s a whole art area that I didn’t get a picture of.  Or, as my kids called it “Mommy, that’s the labyrinth.”

And now we’re in Jackson, MS and at our hotel for the night we’re about to leave and go to my grandparents house.  I can’t wait to see everyone.