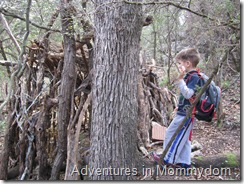 As we walked through the forest we came on a bunch of these little hut places.  At each one we theorized what it was for.  This one had  no discernible place to go in, so we decided it was a trap like they make on Scooby Doo. 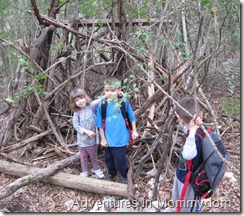 This one was still being built, and there was a rather large pile of sticks nearby it.  And we’re not talking little sticks, we’re talking at least 6 foot tall sticks that have clearly been cut to length.

Theories on who built it: maybe a man, maybe a big bird is building a nest, maybe it was an animal of some kind making a home. 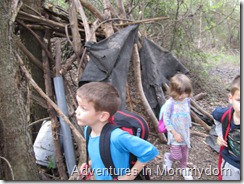 This last one they weren’t as cooperative on a picture, but they’re just exiting it.  Inside of this one is a blanket that looks to be rather tattered and torn.  Aside from the blanket there’s no signs of it being someone’s house.  They all agreed someone must sleep in it. 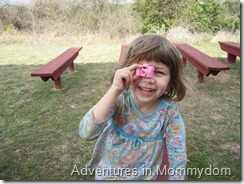 But, my absolute favorite part of the walk came from Princess.  All through out whenever she thought it might be starting to be too scary she’d say, “There’s no reason to be afraid, because I learned in church God is with us no everywhere we go.”

Oh, and if you’re kids are anything like mine and they play with those silly toy cameras at the line in the grocery store and beg you to get them, here’s what you need to do.  Go to Party City and get the little cameras they have for 35 cents each right now.  Heck, you can get 6 of them for the price of one of those silly Disney cameras.  Princess loves the thing.

No really LOVES it!